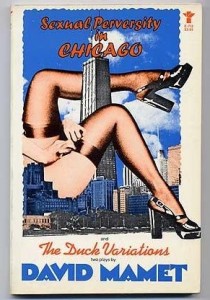 Danny and Bernie balance their mundane office jobs with sexual banter, particularly their experiences and preferences in the bedroom. Likewise, Joan and Deborah frequently discuss the shortcomings of men while at their apartment.

The main plot point is Danny and Deborah’s relationship, perpetuating much of the dialogue about men and women. Their romance is quickly established by sexual attraction, but as the play progresses and Deborah moves into Danny’s apartment, they are unable to talk with each other seriously. Danny complains in frustration, “Everything’s fine. Sex, talk, life, everything. Until you want to get ‘closer’, to get ‘better’. Do you know what the fuck you want?”. Eventually, the couple breaks up while Danny and Bernie revert to their usual talk about “broads” and what is wrong with the world.

The play was subsequently reworked by Mamet with director Stuart Gordon into the four character structure that made it famous and established David Mamet as a playwright. An earlier Mamet play Danny Shapiro and his Search for the Mystery Princess was combined with Sexual Perversity, adding the characters of Bernie Litko and Joan Webber. It was produced and performed by Organic Theater Company in Chicago in June 1974, in a production directed by Stuart Gordon.