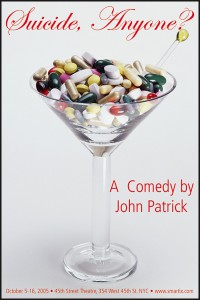 In the first play, Loyalty, a confirmed bachelor is visited in the wee hours by a friend and neighbor who has just had a battle royal with his wife—and has decided that divorce is the only answer. The wife thereupon threatens suicide and in the ensuing confusion, as the friend tries to mediate between husband and wife while keeping them from running into each other, the husband comes to the erroneous conclusion that his friend is also his wife’s secret lover. But happily, and hilariously, things do get straightened out in the end almost.

In the second play, EMPATHY, a frustrated young would-be actress tries unsuccessfully to hang herself, only to be interrupted first by a house painter (who manages to be eternally sunny despite some monumental problems of his own), and then by a TV repairman (who is also a pre-med student—and much taken with his young customer). Again everything gets turned around delightfully, and in the most amusing ways imaginable.

Finally, in CONFESSION, two male lovers face a crisis when one of them peevishly announces that he is moving out. With the connivance of a wacky female neighbor the other man fakes suicide (with sugar pills) but the scheme backfires—with uproarious results. Once more, however, things do work out in the end, and happily, for the best.

“A cleverly constructed trio of interrelated plays by a master of comedy, which offers three antic, yet compassionate, views of a usually serious subject. The plays, all utilizing the same basic set, and with identical casting requirements, may be presented with equal effectiveness either singly or as a well-balanced three-act program.