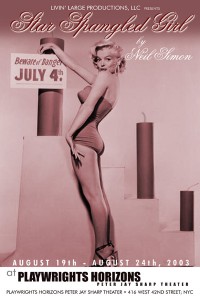 The story is a love triangle, mixed with politics. Andy and Norman are radicals who barely make a living working on their magazine, Fallout, which is dedicated to fighting “the system” in America. Sophie, a former Olympic swimmer, is an all-American, Southern girl who moves into the apartment next door. It’s love at first sight (or, as the play has it, first smell) for Norman, but his feelings are not reciprocated. Norman’s obsession with Sophie makes Andy hire her just to keep the magazine going. Then Sophie falls for Andy, though they are at odds politically, threatening to destroy the magazine and the men’s friendship

Andy and Norman are two earnest young men using their apartment as a publishing office for a “protest” magazine in San Francisco. Sophie, an Olympic swimmer and all-American girl, moves into another apartment on the same floor. Sophie makes her first appearance paying a good-neighbor visit to the combination home and office of the two publishers. Her friendliness and charm leave Norman hopelessly smitten. Thereafter love, with him, is a determined madness, with the humor of it heightened by her frantic rejection of him.

Meanwhile, his partner is fielding telephone calls from the irate printer who wants to collect the money due him, and distracting the landlady from thoughts of back rent with motorcycle rides and surfing expeditions. And while she is convinced that they are editing a dangerously subversive magazine, our heroine soon finds that her real source of annoyance is that the wrong man is pressing his attentions on her. Happily this situation is reversed in time, as love and politics blend delightfully in a bubbling series of funny happenings, set forth with the masterly skill and inventiveness that are the hallmarks of Neil Simon.

This fast moving, hilarious comedy, deals with two earnest young men struggling to put out a “protest” magazine, and the all-American girl who moves in next door and manages to send both of them into a romantic tail spin. “…Mr. Simon can do wonders…with casually tossed-off fantasies that pop up from nowhere and whistle as they go by.”
— NY Times